Facelift for the EquipmentCloud® mobile app

With the new update, the native app has gained many functions and improvements. All functions and applications can now be accessed directly via intuitive menu navigation. Learn more about all the changes and the new RemoteAssistance and Workflows features now.

Android & iOS users can enjoy the benefits of a major facelift of the EquipmentCloud® Mobile. With the recent update Android & iOS users get a completely reworked navigation, an expansion of the feature set and greater granularity in settings. All with the aim of making user-friendliness and switching media between web application and mobile app as easy as possible for service technicians, tool owners, and project managers.

Rework of the app navigation

One of the most extensive changes concerns navigation within the mobile app. The main menu moves from horizontal navigation to the sidebar in the form of a fold-out hamburger menu. Whereas the various modules were previously gathered under main menus, they now appear directly in the arrangement that users are familiar with from the web solution. This means that it is still possible to view profile information with a single click and log out from the app. The submenus remain in the bottom bar so the user can jump from one section to the next with no unnecessary clicks.

Many machine suppliers use the IIoT service solution as a white label solution. This can range from an individual domain to color schemes and images in a user’s own CI, individual naming of the solution, and user-specific system emails. To increase recognition of the machine manufacturer's customer and service portal among end customers and its own employees, the individual color scheme and naming within the main menu was extended to the mobile app. This means that all users feel comfortable in the familiar environment, whether on a laptop, tablet, or smartphone.

Service requests are often urgent and must be handled as quickly as possible. Remote video calls and a direct line to experts via Messenger not only increase user satisfaction, but above all remove the immediate discomfort felt by users at the thought of being paralyzed for hours by unforeseen downtimes. With the mobile app, service requests can now be recorded directly by smartphone, details can be discussed between experts and users using the chat function, and video calls can be started, ended, and joined. By integrating the Bitnamic Connect app and EquipmentCloud®, users move seamlessly between the two applications. The chats, screenshots, and documents recorded or shared during the conversation are transferred to and saved in the machine manufacturer's customer and service portal in a similar manner as known from the web application. The duration of the phone calls is also registered, allowing them to be billed to the minute.

Knowing the status of upcoming tasks and milestones in complex commissioning cycles at any time enables efficient execution and avoids loss of information and unnecessary administrative coordinating efforts. Project participants can act particularly proactive if they recognize delays at an early stage or are informed about upcoming tasks. Push notifications to the smartphone are the means of choice here. With the facelift, the mobile app was also expanded to include the workflows module. In this way, workflows can be filtered by phase status, milestones and responsibilities can be viewed, and checklists can be edited and completed.

True to the principle of "less is more"

Similar to the dynamic dashboard, being able to access frequently used and important information quickly and pre-filtered has enormous added value for users of the mobile app. True to the principle of “less is more”, the dashboard offers an individual configuration. In this way, the displayed widgets can be switched on and off with a toggle (switch) and be rearranged, and specific presets can be implemented. For example, fine-tuning the selection of alarm types, phase statuses, time filters, and the desired key figure (KPI) model as well as the number of entries or the resolution of the uploaded images.

Curious now? Sign up for the demo now and download the EquipmentCloud® Mobile app from the Google Play Store or Apple Store. 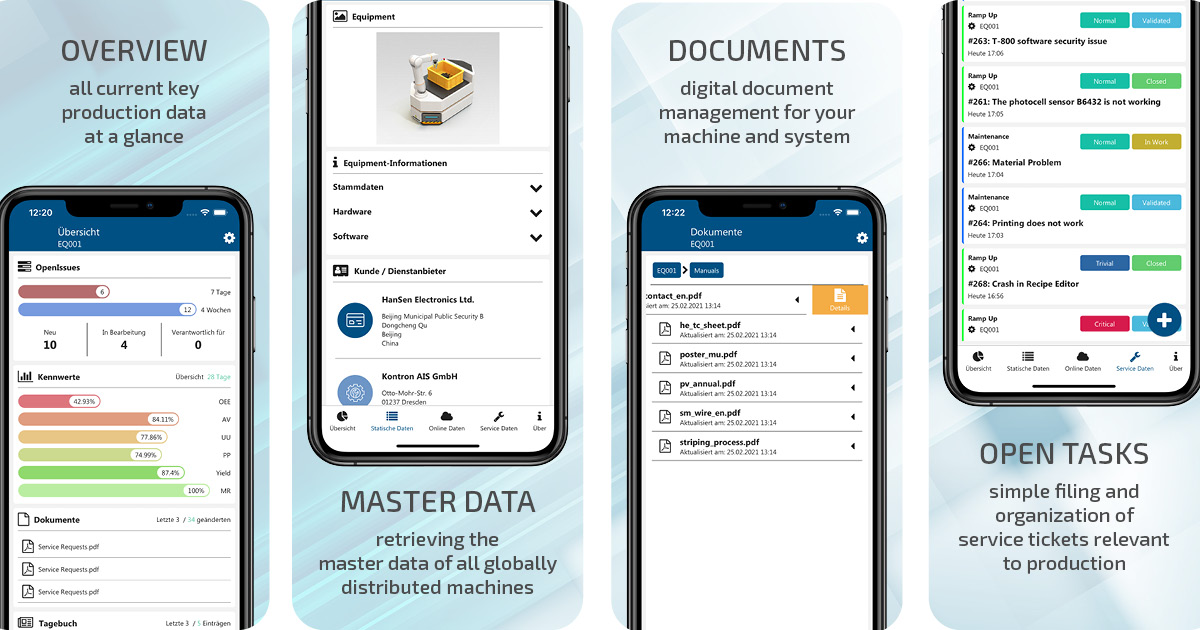